The Dream Nail (the only magic item you will ever need)

The Dream Nail. This forum post explains why it’s awesome in Hollow Knight. I’ll elaborate on why it works just as well in D&D.

The Dream Nail is a magic sword. It does not cut the physical; instead, the Nail is used to carve one’s way into dreams.
The depth of the cut dictates the depth of access. A scratch reveals surface-level thoughts. A deep cut lays the conscious mind bare. Drive the Nail hilt-deep into the forebrain, and one can cross the threshold into dream.
The Dream Nail cuts the spirit, and thus works on the living and dead in equal measure.

On the face of it, the Dream Nail is like a Zone of Truth/Speak with Dead that you stab people with, which is already fantastic. However, it gets even better because it opens

In a world rife with mind-readers and truth serums, those who bear great secrets must hide them from even themselves. They accomplish this by constructing Dream Dungeons; hostile dreamscapes designed to rebuff attempts at recollection OR infiltration.
These are dungeons! You can crawl them, meet people from the host’s memory, and fight monsters! You can use them to pry information out of those driven mad, those long dead, and wizards. You can pull an inception and influence them outside their dreams.
You can even dream-delve therapeutically, assisting the host by actually physically fighting their repressed trauma or unlocking their memories.

More things to do with Dream Dungeons:

It’s a good idea. Steal it. 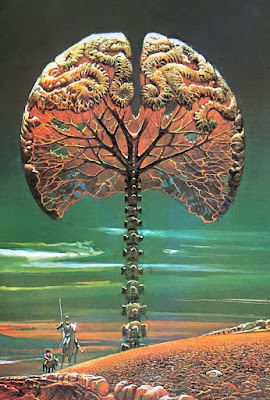