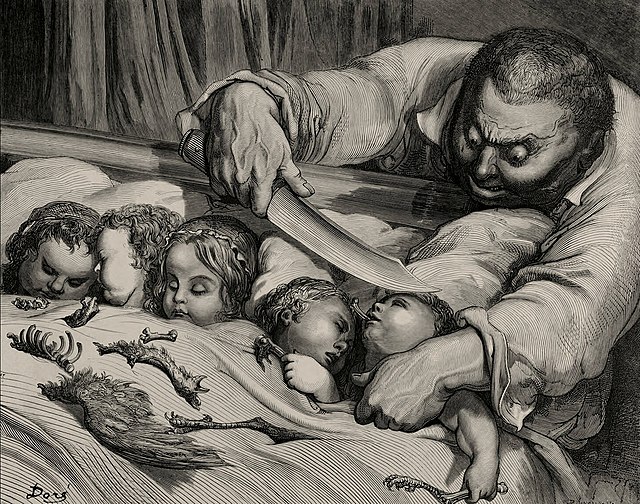 For 5e, use the Cyclops (or a Frost Giant if you're feeling spicy) and build from there.

Cyclops
An ogre who has only one eye.
When the Library of Alexandria burned, Cyclops breathed in the ashes, and thus did he become almost-all-knowing. It is said that his lone outward-facing eye belies hundreds such inward-facing eyes, which scrutinized the great works and made sense of the burnt pieces in an instant. In fact, it was only in their damaged state that he was able to see the patterns imperceptible to aeons old scholarly traditons, and became the one truth-knower on this earth.
Cyclops does not believe, he knows. He knows that the earth floats on an endless cosmic sea of clear fat, and that water, in its least divisible state, resembles a pentagonal pyramid with a single, unblinking eye. He knows the names of the sub-societies which control the surface world, and their plans to dominate the populace using wrongly-buttered bread. And he knows you're in on it too; it said so in the thousand-year-old tome he ate yesterday.
If you can crowbar the truth from his delusions, Cyclops is a remarkable source on extinct civilizations. He has a perfect memory, and dreams of devouring the national university professors who barred his theories--manifestos, really--from publication.

Fomorian
An ogre who is cursed.
Aspiring faerie wizardlings must commit 777 enchantments to memory, of which 444 are curses. They practice these on Fomorian, whose nails, hairs, and various tissues are grown in tiny apothecaries throughout fae space. Boils, tonguerot, facial assymetries, hangman's nail, melty-eye, green scabies, kidneystones, toes-to-stone, ashmouth…
Suffice it to say, he earned it.
He weaves nets from spiderwebs to catch faeries, then eats them like popcorn. He must count backwards from 7 before crossing any threshold. He knows more about removing curses than anyone (but whenever he lifts one of his own, a faerie re-applies the same curse ten minutes later). He'd do anything to burn Hogwarts to the ground.

Gargoyle
An ogre who is a statue.
Gargoyle takes many forms; the saint-devouring Lion, the Mother of primeval Man, God's twelve terrible Pankriatists, and so on. It is unclear whether he is unable to inhabit beautiful statues, and must first deface them, or if it is his possession that renders them hideous. If he is slain, he will possess another statue no less than three leagues away.
His immortality-obsessed priests take tithes from anyone in range of the old cathedral, where their master might feasibly travel to make good on his threats. Gargoyle demands meat, mead, virgin husbands and experienced wives. He is always commissioning larger and larger sculptures, and currently plots to abduct a master sculptor from the next kingdom over. He would have died in the last holy siege, if he hadn't threatened to eat St. John (inventor of the 7 holy fist arts; he's still regenerating in the cathedral dungeon). 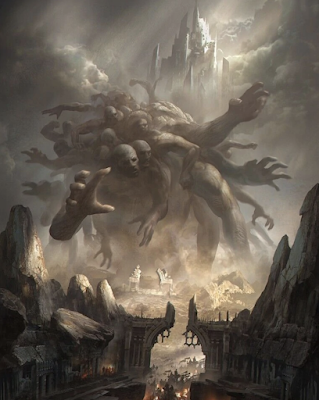 Ettin
An ogre who is many ogres.
There is a mountain which never sleeps. Night and day, it gurgles like a tarpit, building up pressure until it ejaculates thick, house-sized chunks of clay into the sky. With difficulty, these misshapen blobs stand on two trembling, ogresome legs, open two sunken, ogresome eyes, and are promptly devoured by Ettin.
Ettin is the mountain's lover, and also its many sons. He lurks in its deepest caverns, emerging only to patrol the barren surface for newborns. The lowest heads, nearest the stomach, are the youngest, only capable of crying or coughing. At his terrible zenith, far above the sloping shoulders and blackened heart, rests the fiendish, many-bearded patriarch.
They all hate each other; day and night, abuse trickles like water from the mouths of the elders into the minds of the lower heads. Decapitations are frequent, if inaccurate, like stripping a corn cob. The heads-that-roll are lined up in the depths of Mt. Cnoboruk, where they echo hateful diatribes and invent sadistic magicks. It is said the gallery knows everything about anything that might cause harm to another, so singular is their purpose.

Empyrean
An ogre who is the son of god.
Empyrean would be beautiful were it not for his wicked, self-assured sneer. He roams the countryside, demanding hospitality from any town he stumbles into. Days, even weeks, of feasts ensue; he demands entertainment and excesses, lest he grow bored and start amusing himself (his sense of humor is truly depraved). When the coffers, and larders, are empty, he moves on.
No one knows which god sired Empyrean. They all seem to dote on him equally, with only minimal comments towards his behavior. When they ask what to do about him, local clergy are always shocked by the response: "He's just a child," they say, "he'll grow out of it soon." "Boys will be boys." "Give him time. One day, he may make a fine king."

Balor
An ogre who is a demon.
Balor is a very good friend of Satan. Besides that, he's not very different from your average ogre. I mean, sure, he did get that cool fire whip from Mr. triple-6 for Beelzebubsmas, and I guess there are some perks to having an exclusive interest-free demon summoning contract. But besides those few things, completely normal. Run of the mill. Down to earth, even, this ogre.
Yes, he leads the armies of Hell on occasion, vacations in a black iron fortress on an active volcano, and plays golf on the fairways of Tartarus. And yes, he'll tear a goat in half and eat it in front of you like a ripe peach. And yes, that is a fractal bone amulet on his septum piercing, thank you for noticing. But ogres are pretty much always this bad.
The worst thing about Balor is that, on top of it all, he wants you to think he's a nice guy.

Treant
An ogre who is a tree.
A typical encounter with Treant begins like this: a split tree trunk reaches out of the undergrowth and grabs the expedition lead's horse out from under her. It withdraws, dragging the beast into the forest as if grabbing a Kleenex. The horse hits the woodchipper: there is crunching and screaming and sobbing and silence. Then the tree trunk reaches out for more.
Where other ogres are talkative, sometimes even civilized, Treant is nearly feral. He is nude, and mostly teeth from the neck up. Some of them are even his. You will see him chewing on a squirrel with teeth he stole from a moose.
There is only one thing Treant truly loves, and that is horses. Adorable ponies, powerful thoroughbreds, sturdy draft breeds; he can't get enough. He loves to watch them run, and prance, and gallop, and canter; he scrawls their likeness on his favorite cliff face, and sings to himself about their windswept manes. If you get him talking, he'll chatter for hours about the value of genetically pure breeds and the ideal gait to bring to the preakness.
Bring him a horse, and he'll have it in his mouth before you can say "palomino". He can't help himself, he'll even weep as he does it. And when he has finished eating and weeping, he will be furious at you for what you made him do. 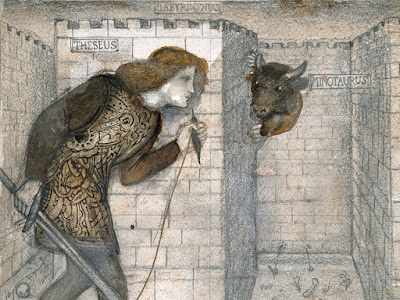 Minotaur
An ogre who is lost.
Although ogres are terribly, ravenously hungry, they don't actually need to eat. Such is the only explanation for Minotaur, who stalks endlessly the executioner's labyrinth of Voth Duma with a cube of solid lead around his head. Robbed of his other senses, he lays the cube against the floor to pick up the movements of his maze-locked prey--in the past, these were political prisoners, but the executioners have long since departed--tracking them without err thru the maze. When he finds them, he stands on his head and pulps them into the tiny gap between his neck and the lead. When he is not hunting, he sings.
Minotaur's cube-helm sports horns in the shape of massive keys, which unlock various doors throughout the labyrinth. The doors are too small for him to fit through. If you could find a way to cooperate, you could both escape, each unlocking the way for one another in alternating sequence until the end. For whatever reason, he hasn't taken anyone up on this offer yet.

Umber Hulk
An ogre who is a dwarf.
As above, so below. As drow to elves, dvrgr to dwarves, and morlocks to men, so too does Umber Hulk exist as a dark reflection of the surface world. He is smitten with the collapse of the Giants, and craves their parallel histories more than any bauble, chittering in his palace of obsessions. On good days, he whiles away the hours carving his lair--a crude replica of their ancient skyborne palaces, inverted and relieved into flowstone. On bad days, he throws a tantrum, destroys his work and digs to a new cavern to start over. If you're crawling the Underdark and notice the stone is now suddenly (and shoddily) worked, you've probably discovered one of his abandoned projects.
Umber Hulk hates having his unfinished work scrutinized (it's not ready yet!!!!!), so they are filled with monsters. He does so by scrambling their minds with his many, mesmerizing eyes, then establishing them in rough hewn kennels. He is a thoughtless shepherd, and his beasts die or thrive without his knowledge.
Over time, he has stolen many Giantish artifacts--Bigby's Staff, Omgulgar's Wizened Greatsword, the Jewels of Kanye--and enshrined them in monuments to his dead culture. Because he is an idiot, he has lost almost all of them. Perhaps you would be willing to trade?

Yeti
An ogre who doesn't exist.
Your camp lies in tatters. The less appetizing pieces of the cleric are strewn about; armor, extremities, etc. The wizard and the rogue saw the whole thing… and you don't believe them. You can't believe them. They don't believe each other, even, and the townsfolk certainly won't believe the lot of you. And you saw it too, but now that your friends say otherwise… maybe you were mistaken after all?
Yeti eats better the larger the traveling party is. If the group is large enough, he can squat over your hearthfire without anyone batting an eye; no one believes one another, so no one believes themselves. You'll keep seeing him around camp, but if you run for help, the group will talk you out of it. If he isn't too hungry, he'll play with his food; you'll find yourselves walking in circles in an endless blizzard, turning on one another over misplaced rations and important trinkets.
Yeti can be coaxed into conversation quite easily, so long as its one on one with someone he can terrify. He likes listening to stories about himself. Hearsay and madmen believe he gained his power by swallowing his own true name, and that he could teach a sufficiently depraved man to do the same. 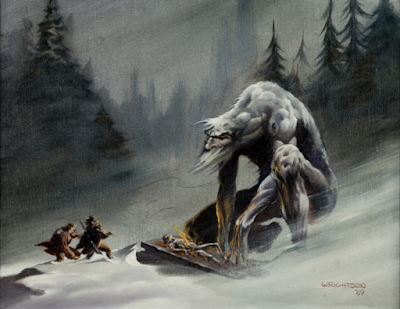 Email ThisBlogThis!Share to TwitterShare to FacebookShare to Pinterest
Labels: bestiary

There Are No Mundane Towers 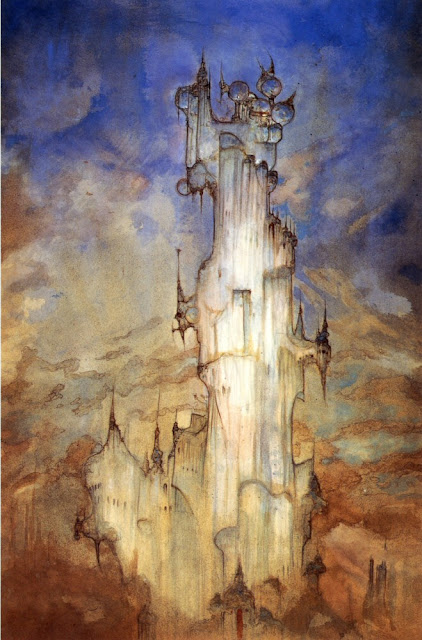